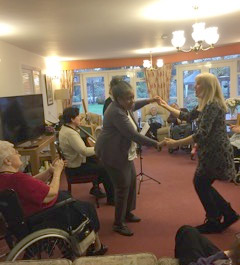 Orchestra of the Swan bassoonist Maria Mealey enjoying an impromptu dance session during a session at Barchester Edgbaston Beaumont, December 2016

The Saintbury Trust is a medium-sized grant-making registered charity which seeks to help charities in its geographical area of parts (but not the whole) of West Midlands, Warwickshire, Worcestershire and North Gloucestershire (please see Eligibility for further details).  A major part of its interest is in Birmingham itself and around Worcester.

The Trust’s interests are wide-ranging. But the trustees have a particular interest in: 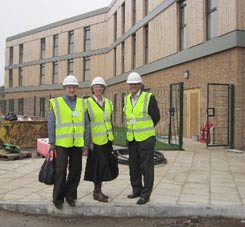 Two of our trustees with Simon Raine, the then-chairman of Birmingham YMCA, outside the new building in Erdington which the Trust helped to fund.

The majority of the grants awarded are between £1,000 and £5,000. Larger grants tend to be awarded to charities of which the trustees (or at least one of them) have special knowledge or in the work of which they have a particular interest.

For historical reasons the Trust also makes grants to a small number of charities (including national charities) outside its geographical area where one or more of the trustees has special knowledge or interest. These charities have been, or will be, notified by us of their status.

Find out about our background and our trustees and read our latest accounts.

The Saintbury Trust is a charity registered with the Charity Commission under registration number 326790.